Vue is one of the most beginner-friendly JavaScript frameworks I have ever used before. I have been using Vue for almost 2 years and I have no stress about creating and updating the Vue component.

However, right after I started using Vue I wondered how we could manipulate DOM inside a Vue file. This issue will be resolved by using $refs to access DOM. Many developers might get the same issue so that I decided to write today's blog post.

What is $refs and ref

So, I refer to it from the official Vue documentation.

But, I can't understand it by checking the official documentation...

I have attached the details of both $refs and ref introduced by the official Vue.js Documentation. However, These are not kind enough for most of the developers who have never experienced using Vue.js.

That's why hopefully this blog post will be a valuable source to help to understand the core concepts about $refs.

How to use $refs and ref?

To clarify the difference between $refs and ref, $refs is the object and all the DOM elements are contained within this object.

But, $refs itself is useless. ref should always be registered in the HTML code to take effect $refs.

For example, to access to the DOM of the element which is set ref="slider", either this.$refs.slider or this.$refs['slider'] can be accessible to DOM.

In order to confirm the DOM of the one you are supposed to access, you can write console.log(this.$refs.slider) in mounted().

Then, the result of DOM will be displayed in the console of the dev tool as below. 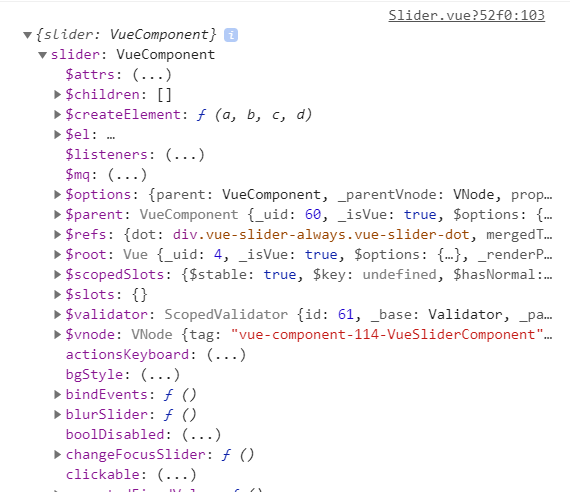 Until now, I have explained about $refs for DOM access. But actually, you can even manipulate DOM by using vanilla JavaScript like document.querySelector('test').

If you only need to manipulate DOM of the current component, You could use vanilla JavaScript instead of $refs.

The reason why $refs can be prepared for Vue is that with $refs we can access the DOM of a parent and child component. Moreover, even DOM of the plugin will be accessible by $refs. With only vanilla JavaScript, It won't be possible.

2 things you should be considered before using $refs

Before adding $refs into the component code, Please take a deep breath and consider that you do really need $refs to achieve the expected behavior.

According to the basic concept of Vue.js, we should use Vue's features as much as possible rather than directly manipulate DOM. That's how Vue is welcomed for the developers. We were all fatigued direct manipulation of DOM using jQuery.

To be honest, I have had this mistake several times. It looks so amateur mistake but It has happened it anyway. To make $refs be applied to the component, the ref must be set to the target element you want to call out.

Note that $refs and ref are the pair used for DOM manipulation.

I personally don't prefer to use or update the code which $refs are included in several parts. However, sometimes It happens for the Vue developers.

In addition, getting familiar with the specific feature of the daily used technology will eventually help to save your time a lot.

So hopefully, this blog post is worth reading and gaining someone's knowledge. Cheers for all the devs, Thanks!